Bordeaux, a city of History and Future

01/03/2021
A hotel has made the big difference by being simultaneously named best romantic hotel and best hotel for families. The Lenkerhof Gourmet Spa Resort has indeed separated the services that benefit everyone in such a way that everyone coexists without realizing it for a memorable stay. The outdoor swimming pool of the "7 sources" spa of this Relais et Châteaux, which is also a former spa center, has its own source and allows you to benefit from this water rich in 350 years of minerality with the added bonus of a splendid view of the valley. On the gastronomic side, the chef surprises you with a selection of sixteen new dishes every day based on the freshest local ingredients.

Bordeaux ... just the name makes some dream and others salivate. For three years, the city has been accumulating coronations; Best European destination in 2015, Europe Leading's City Break, Destination 2016, Best of 2017 by Lonely Planet. And after a weekend there, we can easily understand why! 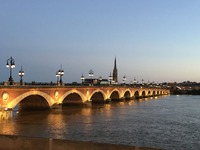 After a flight of one hour and a half from Brussels, we have arrived under the Bordeaux sun - Temperature displayed 18 ° C. What more could you ask for on November 17th? We are expected and welcomed on site by our friend and partner Jean-Pierre, as well as by Loïc from Bordeaux Executive Travel. They gave us the immense surprise of picking us up in Tesla Model S (the class ....) for a private tour of the neighboring vineyards.

First Stop: The Caudalie sources. Because yes, this is where wine therapy was born. Located opposite the sumptuous Smith Haut Laffite vineyards, this wellness center is simply magical. It was in 1993, at the height of the harvest season, that the click was made. The medicinal virtues of grapes have been known since ancient Greece, so the idea came to use the seeds and the pholyphenols they contain to transform them into creams or other wellness products.

Since then, the establishment has also been transformed into a 5 * hotel, with 2 restaurants and 4 banquet rooms that can accommodate up to 80 people in a theater. Who says better for a high-end meeting or an incentive around wine?

We then set off on the road to Saint Emilion and its grands crus. Before us parade the prestigious castles; Château la Gaffelière, Château Pavie, Château Fonplégade to name but a few. Excellent guide Loïc explains the return of biodynamic wine culture. Damaged by decades of "industrial" cultivation, the soils suffered greatly and the quality of the wine was affected. In Saint-Emilion, we give pride of place to organic and the traditional method. This made it possible to modify the profile of the wine in a few years, improving it of course! A simple question of osmosis between man and nature.

He also explains to us that under our feet is a real Gruyère cheese. Indeed, the soil of Saint-Emilion is mainly limestone and it is therefore here that the famous white stone that can be found everywhere in Bordeaux is extracted. Some of the quarries can be visited while others are now used as cellars, where the wine ages for a few months in barrels before being bottled.

We then stop in the village to admire the panorama, the monolithic church and its bell tower, as well as its collegiate church. We note in passing the Hostellerie de Plaisance, a magnificent Relais & Châteaux nestled in the heart of the village and its restaurant with 2 Michelin stars. Here too, it is possible to organize a small "private" meeting for up to 11 people.

Reluctantly, it's time to head to Bordeaux, where we are waiting for our first glass ... of Bordeaux of course! We sit on the terrace of Orléans train station, on the banks of the Garonne, with a view across the river on the Gironde capital. With a nice glass of Château Villa d'Alma 2014 (Pessac Léognan) in hand, Jean-Pierre tells us that we can find several works by Gustave Eiffel in Bordeaux, in particular the Eiffel footbridge which linked the two banks of the river and which also served as a railway bridge. This work was barely saved a few years ago, when a second bridge was built nearby, to meet TGV standards. After admiring the sunset over the city, Loïc drops us off at our hotel, in the city center, from where we will continue the tour on foot.

For this first night, we stay at the Quality Bordeaux Center. The location is ideal for exploring the city, right in the pedestrian center. This is a small 3 * offering impeccable value for money. For smaller budgets this is the ideal hotel. What strikes us when we arrive at the hotel (it is after 6:00 pm) is the people in the streets. Here the shops do not close until 8:00 pm (oh joy oh happiness) and above all, the inhabitants live outside. Everywhere you can find restaurants, cafes, terraces (heated or not). We already feel that it will be difficult to make a choice for dinner. But first of all, we go for a walk of 1h30 in the streets and alleys of the city. We start with the famous Place de la Comédie and its Grand Théâtre, in the heart of the Golden Triangle. It is truly an emblematic place of the city. In 2013 a cast iron statue 7 meters high, representing a female face, made its appearance, but it could well leave the place in 2019. For lovers of Haute Gastronomie, or quite simply a nightmare in the kitchen, it is Here too are the restaurants of Gordon Ramsay and Philippe Etchebest respectively.

From there we go to the Girondins monument-fountain erected in memory of deputies executed on this square in 1794. At the same time, we witness the installation of the Christmas market which will open on November 24, on the Place Lace des Quinconces. We then follow the banks of the Garonne, as far as the Place de la Bourse, to admire the illuminated buildings reflected in the reflecting pool. The quays were rehabilitated in the 2000s and have been on the UNESCO World Heritage List since 2007. Entirely pedestrianized, it is a pleasant walk for joggers, families and cyclists which stretches for several kilometers. Before returning to the hotel and leaving our friend Jean-Pierre, we still pass through Porte Cailhau, a vestige of the Middle Ages. At his feet, there is a plaque explaining that Bordeaux is on the road to Saint Jacques de Compostela, which we were totally unaware of.

The next morning, invigorated after a good night's sleep, we are ready to explore the city by day. But first of all, a quick check out because we are changing hotels! And yes, this evening we are staying at the Intercontinental Bordeaux le Grand Hôtel, on the Place de la Comédie, just in front of the Grand Théâtre. This old mansion (18th century) has seen the greatest names in French art and culture; Victor Hugo, Toulouse Lautrec ... Following a complete renovation started in 2007, under the watchful eye of Jacques Garcia, the hotel went under the banner of Intercontinental Hotels in 2015. With its 130 rooms and magnificent reception rooms, the place is simply ideal for a seminar, an incentive or even a private stay in the heart of the capital of Aquitaine. We also fell in love with the Sauternes trade fair. With its paintings and period parquet, the room is also listed. It remains to mention the Léa baths, the hotel spa spread over 1000 m² with Sauna, hammam, swimming pool, 8 treatment rooms and the roof top bar (with jacuzzi!) Offering an exceptional view of the Opera. So, convinced?

We decide to walk along the quays again, but this time in the direction of the city of wine. This is an opportunity for us to learn a little more about the history of the port of Bordeaux, once flourishing, thanks to the wine trade, but also the links it provided with the West Indies and Africa for the sugar, rum, bananas, coffee ... Less glorious period, it was also a slave port at the beginning of the 19th century. But there where hundreds of hangars extended, the quays have been converted into shops, restaurants and other outlets, where river cruise ships or pleasure boats still venture. Proof of the dynamism and the good health of the city which does not stop investing and restoring, the J. Chaban Delmas bridge was inaugurated in 2013, thus allowing an easier crossing between the left bank and the right bank. In order to let the liners pass, it rises in 11 minutes to 53 meters in height, a technical feat!

A few meters beyond the bridge, we finally reach the Cité du Vin. New place of life and culture since May 2016, wine lovers will be in heaven here. We are already impressed by its bold, rounded architecture. It seems that the shape is similar to a decanter. After all why not. On the ground floor you can find a snack bar, a restaurant, a shop, but also and above all the Latitude20, a wine cellar from around the world, which brings together bottles from more than 70 countries! On the first floor nestle a permanent course, temporary exhibitions but also reception rooms (some equipped with spittoons for workshops / wine tasting) and a 250-seat auditorium. All of them can of course be privatized for your conferences, meetings, cocktails .... On the sixth floor, you will find 3 more small rooms perfect for management committees (6 to 24 places). And finally, on the 7th and last floor, the restaurant offers you a panoramic view of Bordeaux, with no less than 500 wine references on the menu.

If Bordeaux has a rich cultural heritage, the local gastronomy does not have to be ashamed. It seems that this is the city in France with the most restaurants per capita. Whether you are a savory or rather sweet palate, the region is full of specialties, which you can easily find in brasseries: Pauillac Lamb, Foie Gras, Bayonne ham, duck breast, Truffles ... as much to tell you that the dinner time came, the choice was difficult. All the more so since, by the greatest of luck, the 4th edition of the So Good festival was held in Bordeaux during our getaway, with the oyster from the Arcachon basin as a guest star. If we unfortunately did not have the opportunity to taste the real macaroons of Saint-Emilion, we nevertheless took the time to stop in one of the many Baillardan shops, to enjoy a canelé and we had the pleasure of see the pastry chefs at work. Yes yes, in some shops canelés are produced before your eyes. 100% artisanal therefore!

If there are cities where 2 or 3 days are enough to discover them, Bordeaux is definitely not one of them. We are well aware that we have only seen one side of the city and we are eager to return there to deepen this visit, but also to take more time to discover Bordeaux. Since 2019, a TGV direct from Brussels to Bordeaux allows you to make the trip from city center to city center in just over 4 hours. So no more excuses, you too can explore this magnificent city!

We use cookies to enable the proper functioning and security of our website, and to offer you the best possible user experience.

You can customize your cookie preferences here. Enable or disable the following categories and save your selection.